It doesn’t smell the same

Posted on April 15, 2011 by lanceelliottwallace 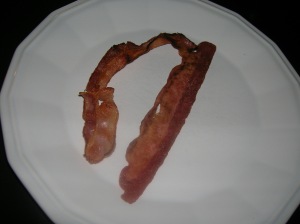 Which one smells better? One of these two strips of meat is from a pig, the other a turkey. Can you tell by looking?

My Granny relished feeding her grandsons. I’m sure she would rather have been doing other things, but cooking took on a new pleasure when my brothers and I showed up each summer.

The smell of your grandmother’s house is unique, and everyone with a Granny can smell it in their mind’s nose at the suggestion. Whenever you catch a whiff of it, you are transported back to carefree days when the “Price is Right” was high drama and squirrels invading the tomato patch was an issue of national security.

Part of the smell of my Granny’s house on Beatrice Avenue in Columbus, Ga., was bacon. I don’t know if she fixed it all the time or just when we were there; but to me, the smell of cooking bacon always reminds me of Granny.

Curiously, this smell is growing more and more elusive.

You see, back in the early ‘70s heart attacks killed people randomly. Now, heart attacks kill people after years of smoking or eating bacon. So we don’t eat as much bacon as we used to. Oh, we eat substances called “bacon,” but it’s not authentic. It’s not deadly. 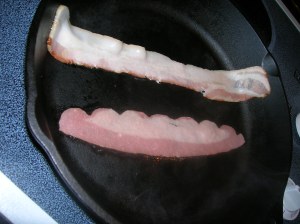 You can definitely tell the real thing before it starts to sizzle.

About every other morning I’ll pop a couple of strips of turkey bacon in the microwave. It does have a little bacony flavor, but it doesn’t smell the same. It doesn’t even sound the same… no crackling and popping in the cast iron skillet. Just the hum of the microwave and the faint sizzle in the paper towel. It’s nearly always a disappointment.

Granny’s bacon never disappointed, mostly because it was accompanied by buttermilk biscuits. I almost never smell those anymore either, and I eat them even more rarely. Those will definitely kill you. I distinctly recall the summer my brother and I spent two weeks at Granny’s and Paw Paw’s house. That was the summer my brother went from wearing “slim” Toughskin jeans to “husky.”

For those hoping for a bacon revival, Southern Living’s March issue presented 30 recipes that celebrate what they called a “Southern Staple.” I could smell Granny’s house just reading them.

What’s funny is that my own sons know the difference in bacon, too. At least once a year, usually while on vacation, Carla will cook actual bacon, though not in the skillet. With the bacon sizzling on the broiler in the oven, my oldest son will say something like this: “Are we having the good bacon today?”

Here’s hoping we’ve raised him well enough to know good bacon when he smells it.

Lance Elliott Wallace lives and writes in the Atlanta suburb of Lilburn. A native of Texas and a former resident of Florida and Alabama, Lance married a Georgia girl and together they are rearing three Georgia boys. By day he communicates for Georgia Tech engineers and scientists. He spends his early morning hours praying, writing and running.
View all posts by lanceelliottwallace →
This entry was posted in Uncategorized and tagged bacon, bacon recipes, granny, Lance Elliott Wallace, Lance Wallace, New South, New South Essays, South, Southern Culture, Southern Living. Bookmark the permalink.

1 Response to It doesn’t smell the same