Mississippi-born singer songwriter Kate Campbell intruded into my awareness in the late ‘90s, and since then, each lyrical and patently Southern album she releases is a must-own in my limited collection.

On Sept. 27, she released her latest, a live album called “Two Nights in Texas,” with recordings from back-to-back shows April 8-9, 2010, at the Blue Rock Artist Ranch and Studio in Wimberley, Texas.

The 14 tracks showcase Campbell’s diverse range of styles and topics, although all are grounded firmly in the red clay of Dixie.

Her repertoire, while not exclusively ballads, tells stories. I had the opportunity to hear Kate explain her songwriting process back in 2005 at a conference in San Antonio. That peek behind the curtain has helped me hear the stories she tells even as I tap my foot or sing along.

Of course, I’m partial to “New South,” a 2002 song chronicling the obvious as well as the subtle changes to southern living that indicate even tradition-laden Southerners are evolving. The version on “Two Nights” is a little more up-tempo, and the dobro gives it a rich sound.

A compelling element to the album is a seamless medley called “The Steal Away Trilogy.” At a little more than eight minutes, the piece includes her songs “Would They Love Him Down in Shreveport,” “Peace Comes Stealing Slow” and “Steal Away.”

As a fellow preacher’s kid, I resonate with the way she weaves deeply spiritual themes into her stories, letting hymns, Southern gospel and spirituals infuse and inform her music. I like that I can put the windows down and turn up the car stereo, as she suggests, and crank out “See Rock City” or mull the truths of “10,000 Lures” in mellow contemplation. 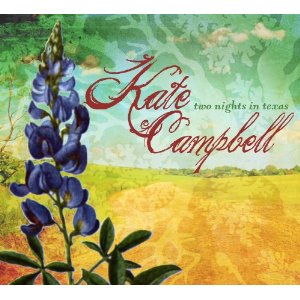 Though I’ve heard it dozens of times, I’m still haunted by “Crazy in Alabama,” and this rendition is a good one. The story of the Fall of Adam gets a Mississippi Delta reinterpretation in “Genesis Blues.” Your heart will melt when you remember your old home place as Kate reminisces on “Tupelo’s Too Far,” and I defy you to listen to “Look Away” without feeling a pang of regret at how insidious the snare of racism has been in the South.

As I’ve previously stated in this space, I’m more of a writer than a musician, but unlike some singer songwriters, Kate has a beautiful voice that can lilt or twang depending on the context. And on this album, the very accomplished musicians accompanying her deserve credit, including Sally Van Meter on dobro, Scott Ainslie on guitar and Don Porterfield
on bass.

If you’ve had the misfortune of missing out on Kate’s music this long, I urge you to start with this live album. Kate spins a good story with or without music, and her comments captured on the album will give you a taste of her colorful personality, eye for telling details and sharp wit.

After you’ve soaked in “Galaxie 500,” “Free World,” “Cotton Field Away,” “Jesus and Tomatoes” and the rest, you’ll be ready to appreciate her broad discography. My recommendation: Listen to “Two Nights in Texas” for a few weeks, then go and buy everything she’s ever recorded.

I promise the experience will make you wiser and more in tune with Southern culture in all its expressions.